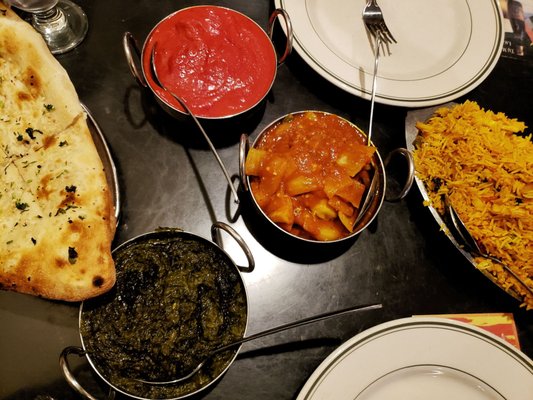 The end of the weekend was upon us. The impending Monday was looming it’s ugly head over the group of us. It was Sunday, and the sun had set. Some had worked. Some had surfed. Some were feeling great. Most were in rough shape. As we all sat in a semi-circle on a vintage couch, it was only destiny that all of us share one last supper with each other before the first full work week of 2020 slapped us in the face. After this pow wow we would split, and potentially not reconvene until the Friday that was miles away.  I already had an idea as to which meal was coming down the pipeline. All of us in need of something that is truly a treat for our taste buds. It was a meal my roommate and I typically used as a crutch to seal off the weekend in a delicious and flavorful way. It was off the beaten path, and required a short trip in a vehicle to get to. But the fruits of the labor would be worth it.

As we crowded around the coffee table and mapped our orders, I knew calling it in would be a real treat for the lucky friend that would pick up the phone and dial. With all sorts of unorthodox names coupled with the person on the other line may not hear you clearly, sometimes it could be a challenge. We would dread calling it in. We decided on a trade-off system in which whoever called it in would not have to go pick it up. When push came to shove, someone had finally stepped up. Luckily, he was able to pronounce all the dishes correctly and just like that our order was put in. 20 minutes, said the lady on the other side of the line. It’s on. Looking back, calling it in was an easy task. But couple being tired and hungover and any small task can feel like a Herculean effort. We would play a couple more rounds of COD before we departed for the promised land. I would join my pal as copilot to steer him in the direction of deliciousness.

I’ve done this pickup route many times. It takes at most 10 minutes to get there, usually is just a 5 minute pickup, and then another 10 to get back. A fraction of time to get to the source of the yums and enjoy a tasty dinner. This time was a little different. Nothing was looking out of the ordinary at first. We would make it to the restaurant in the usual amount of time. No clogging on the freeway and an easy exit lead us there in no time. Upon parking and entering,I noticed there was a family sitting down and eating inside. Typically, I have never seen more than 1 family inside eating in, and this is no different. The food is so damn good, but I can’t say we don’t think it is a little weird that out of the ~10 times we have picked up food here, we have never seen more than 5 humans inside. But I digress. All I cared about was the grab and go of the dishes we ordered.

What went sideways was the wait for the food. We would enter the restaurant, and only see the family dining. No one greeting us at the door. No one in the kitchen. It was quiet. This isn’t particularly atypical, but usually someone would hear the door and emerge from the kitchen. When no one emerged from the kitchen, we would begin to hear some noise in the kitchen. It just sounded like the chef preparing the takeout meals. Surely someone would come out to check on the table eating in a reasonable time, I assured myself. A couple minutes go by and nothing. At this point the young boy at the table was having a ball watching me take different angles to look into the kitchen and see who was there to help us. I couldn’t see anyone, and wasn’t really feeling like walking back in the kitchen, so we waited.

By the time someone had finally came out to greet us, we had shuffled through 3 of the bizarre songs accustomed to the restaurant, I became friends with the toddler at the table eating, and the smell of spices was starting to stick to my clothes. We had never had to wait this long, but also never placed such a large order. I joked with my buddies that we should eat in, but after sitting in there I am pretty happy that someone talked us out of sitting down. Something in there just isn’t right, and it only took me sitting in there for longer than 5 minutes to notice that. Finally, the food would arrive wrapped up and plenty hot. We would pay and carefully carry the bag out from the bottom. It was a ton of food, but everyone was pretty hungry. Back onto the freeway we went and in a moments time we were back to the comfort of my home. Before we could eat, I had to retell the story of the delay and the strange intricacies of the restaurant to those who have never been. But it was time to each.

Chicken Korma. Chicken Vindaloo. Two Tikka Masalas. Two Garlic Naans. Tons of rice. It was time for the boys to feast. A quick 10 minutes of silence would go by as we all fiercely munched down on our meals. Everyone was clearly feeling better after eating, as we all were pretty laggy and unenthusiastic the whole time leading up to this moment. Sometimes all you need is a good meal. And sometimes all you need is good company. I challenge everyone to at least once a week host a slew of your pals in one place and chow down on some good eats. Doing it on the weekend sometimes ensures comical stories from the nights on the town or days sans work. Laughs will be had, stories shared, and bellies filled. A grand end to the first weekend of 2020.